Trending Topics: Who are your 5 All-Star starters from the Western Conference?

NBA.com's writers give their picks for the West starters in next month's All-Star Game in Cleveland. 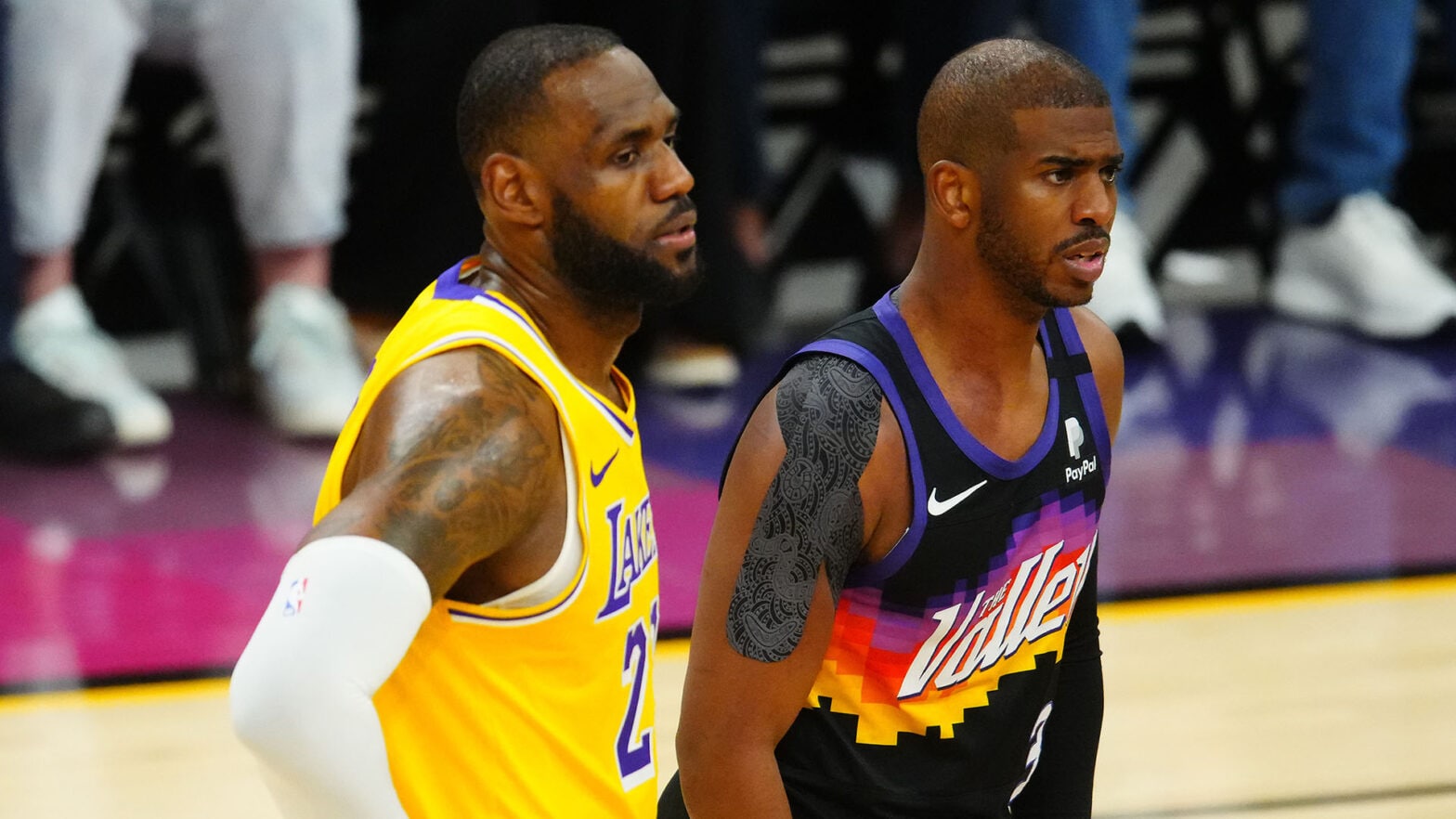 LeBron James and Chris Paul were popular picks among our writers for West All-Star starting nods.

The first fan returns of NBA All-Star Voting 2022 will be announced on Thursday, Jan. 6. Ahead of that announcement, NBA.com’s writers and analysts give their take on who the West starters should be.

The last time the All-Star Game was in Cleveland, the five West starters combined for nine 3-point field goal attempts. Curry, in seven appearances, has averaged 12.7. Morant, a Derrick Rose Play-alike and a worthy Kia Most Improved Player candidate, has his Grizzlies at 10-2 when he scores 28 or more. James is in the midst of the most prolific season by a 37-year-old player ever and he’ll tie another graybeard (Kareem Abdul-Jabbar) with his 18th All-Star selection. Jokic is the king of the advanced stats crowd and might be better than last season, which is how Steve Nash and Giannis Antetokounmpo earned their back-to-back MVPs. Look, All-Star Games are a bad showcase for defensive aces like Gobert, but if it’s a midseason honor and defense still is half the game, no one is more deserving of this spot.

Just like for most of his NBA career, Curry spent this season setting shooting milestones while fueling the Warriors’ dominance. The milestone: Curry eclipsed Ray Allen for the NBA’s top spot for most 3-pointers. The dominance: the Warriors have the NBA’s best record (29-7) while ranking fourth best in offensive rating (112.). A big reason for that undoubtedly has to do with Curry, who ranks fourth in the NBA in scoring (27.2 ppg), first in 3’s made (179) and second in free-throw percentage (92%). Even at 36 years old in his 17th season, Paul has played as if he still remains in his prime. He has led the NBA this season in assists (9.9) while ranking fourth in steals (1.9). He has fulfilled this job description while mastering two things: He has stayed dependable during crunch time (last five minutes), ranking second in the league in total plus/minus (+49) and fourth in shooting percentage for those that take at least 20 shots per game (56%).

Who knows if a 37-year-old James can consistently stay healthy. He already missed a combined 12 games this season, 10 of which had to do with right ankle and abdominal injuries. But when James has been on the court? He has shown no signs of slowing down, even in his 19th NBA season. James logged 30-point plus performances for a seven-game stretch, which tied for the second-longest streak of his career. During those times, James dominated with his strength, athleticism and playmaking both as a guard and a big man. The Warriors’ strong play also stems from their defense, which Green has once again ensured has become one of the league’s best. The Warriors have ranked No. 1 in points allowed (101.3) and defensive field-goal percentage (42.7%) as well as No. 2 in defensive 3-point shooting (32.6%) and steals per game (9.31). Green has his fingerprints all over those numbers by defending all five positions while averaging 1.4 spg and 1.3 bpg. Green also remains a dependable playmaker, ranking seventh in assists per game (7.7). Without Jokic, the injury-battered Nuggets would likely be headed to the Draft lottery. Following his MVP season, Jokic ranks fourth overall in triple-doubles (six). Jokic is second among centers in scoring (25.7 ppg) and first in assists (6.9 apg) while ranking second in rebounds (14.0). Save for a one-game suspension for a dangerous shove on Miami’s Markieff Morris, Jokic has stayed resilient with both his availability and helping the team navigate through numerous injuries.

The new career 3-point king, Curry has drifted in and out of shooting slumps this season but the overall impact on the Warriors cannot be denied. He’s producing 27.2 ppg and as usual, drawing double-teams nightly for the West-leading Warriors. At age 36, Paul remains a tremendous leader and classic point guard who makes his teammates, and his team, better; that’s why the Suns have hardly missed a beat just five months removed from an NBA runner-up finish. The current league assists leader is shooting 48% overall while elevating the play of the Suns’ core, made more impressive considering the chunk of games missed by Devin Booker. The freshly turned 37-year-old James is defying the geriatric odds with career-bests in overall shooting, 3-point shooting and even free throw shooting while posting 28.5 ppg, 7.5 rpg and 6.6 apg. Amazingly, the reigning Kia MVP Jokic is playing at a higher level so far this season while hauling a heavier load, taking into account that the Nuggets are missing Jamal Murray and lately, Michael Porter Jr. Jokic is staking his claim as the finest all-around center in the game based on his consistency. As for Gobert … yes, it sounds weird to place him in such company, given his obvious limitations offensively. That said, for a good stretch of this half-season, Gobert has sparkled, and not just defensively. He’s shooting 70.6% and averaging 15.5 ppg, 15.1 rpg and 2.3 bpg. At this moment, not many frontline players are having a greater impact.

Curry is an easy pick on the first pass. Then it’s about Mitchell vs. Ja Morant. Morant has slightly better boxscore numbers and has been slightly more efficient, but Mitchell has him on team success, defense and games/minutes played (and the Grizzlies were 10-2 without Morant). He ranks sixth in usage rate for what has been the league’s best offense by a wide margin.

Jokic is the only first-pass pick here, repeating his MVP-worthy performance from last season and keeping a depleted supporting cast over .500. On the second pass, there’s no denying James, who’s having his most efficient scoring season (true shooting percentage of 59.6%) since he was in Miami, now flourishing as a center. Then it’s Gobert vs. Draymond Green. Green is the early favorite for Kia Defensive Player of the Year, anchoring what has been the league’s best defense by a healthy margin, and he certainly plays a role in the Warriors’ fourth-ranked offense. But Gobert isn’t far behind in regard to DPOY consideration, he’s an essential element in Utah’s top-ranked offense, and in regard to overall on-court impact, he’s simply one of the most important players in the league.

Curry isn’t shooting the ball up to his standards, but we all need to realize that despite the fact, he’s putting the all-time 3-point record further and further away from the competition on a nightly basis. He’s also a strong contributor on defense for a team that has sat atop the Western Conference standings pretty much all season. Curry started off the season as the early frontrunner for the Kia MVP, and he’s still very much in the mix because we all know that Steph doesn’t stay cold for long. Paul, meanwhile, is leading the league in assists (9.9), and he’s fourth in steals (1.9) for a Phoenix squad that continues to hold its own in the West despite players coming in and out of the lineup due to injuries and Health and Safety Protocols. Speaking of the latter, look at what Jokic is doing in the face of so much adversity. Denver is No. 5 in the West, and you can almost attribute that solely to Jokic’s contributions with the Nuggets missing so many players due to injuries. You could argue that Jokic is playing better now than he did last season when he won the MVP. Meanwhile, Green is in the thick of the Kia Defensive Player of the Year chase and is a defender and main facilitator for the best team in the West. Then, we get to King James, who has gradually elevated himself back into the MVP conversation. At 37, he’s coming off a stretch in which he poured in 31 points or more in seven consecutive outings, as the Lakers won three of their last four to get back to .500. Guys like Rudy Gobert, Paul George, Luka Doncic and Karl Anthony-Towns figure into the mix for one of the frontcourt spots, but Jokic, Green and James (who has been a starter in 17 straight All-Star Games) are the most deserving on my ballot.

> More Trending Topics: Who are your 5 East All-Star starters?