A closer look at the top 10 players in drives per game so far this season. 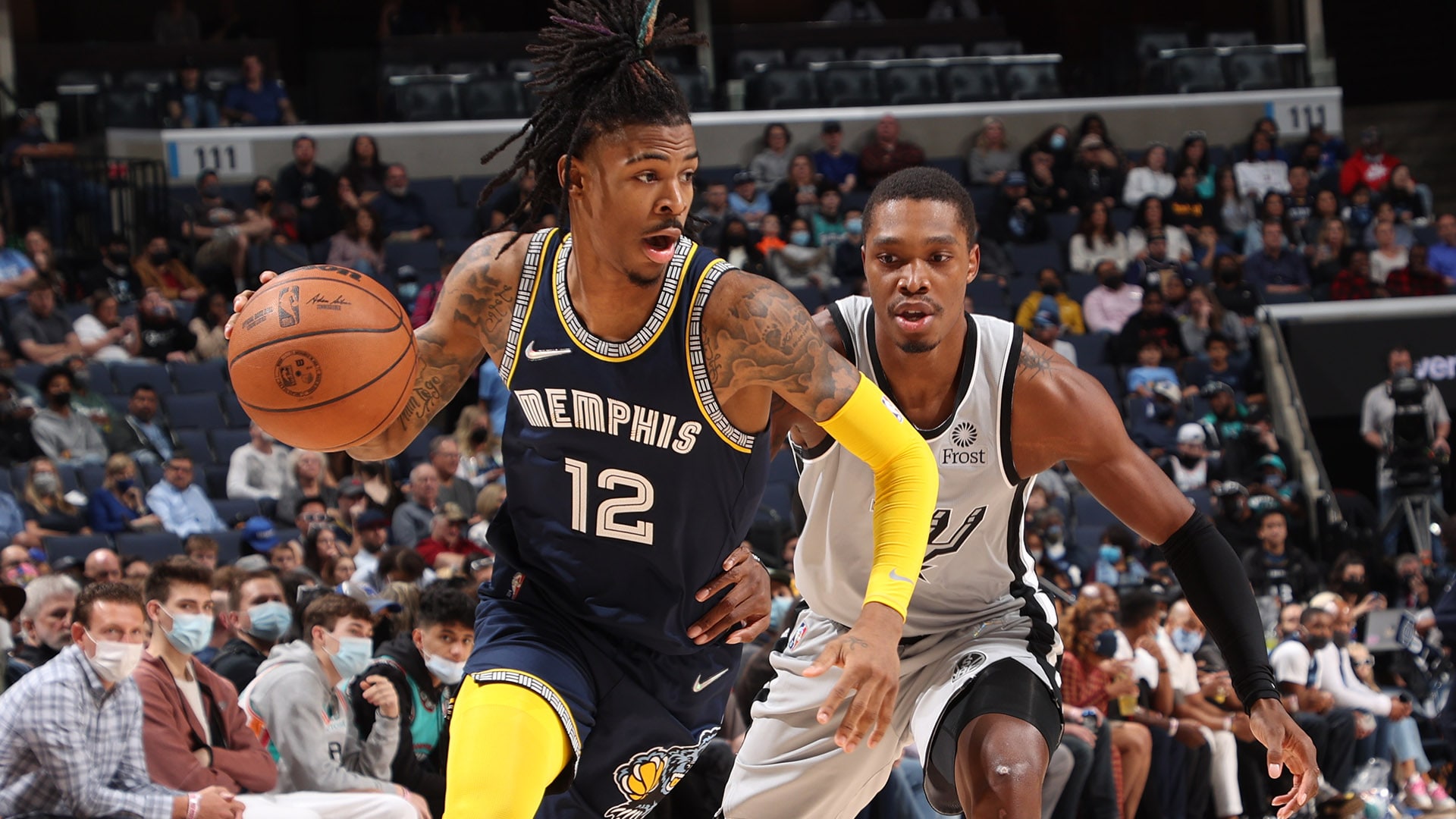 On Monday in Brooklyn, Ja Morant finished with game highs of 36 points and eight assists to lead the Grizzlies to a 118-104 win over the Nets. It was Memphis’ fifth consecutive win and it has extended the streak to six straight entering Thursday’s game against Detroit (8 p.m. ET, NBA League Pass).

The win over Brooklyn saw Morant in his usual attack mode, using his speed and shiftiness to get into the lane and make plays for either himself or his teammates. Of his 36 points, 22 came on drives to the basket, as did half of his eight assists. Morant was able to consistently beat his defender off the dribble, get to the paint and draw help defenders and either contort his body for a layup, hit a floater or find a teammate for an open look as multiple defenders focused on stopping his drive.

Morant ranks second in the NBA with 20.7 drives per game, according to Second Spectrum player tracking data through games played on Jan. 5. His 13.6 points per game off his drives tops the league and he is one of four players to rank in the top 10 in both scoring (1st) and assisting (7th) off drives so far this season.

Here is a look at the top 10 players in drives per game: 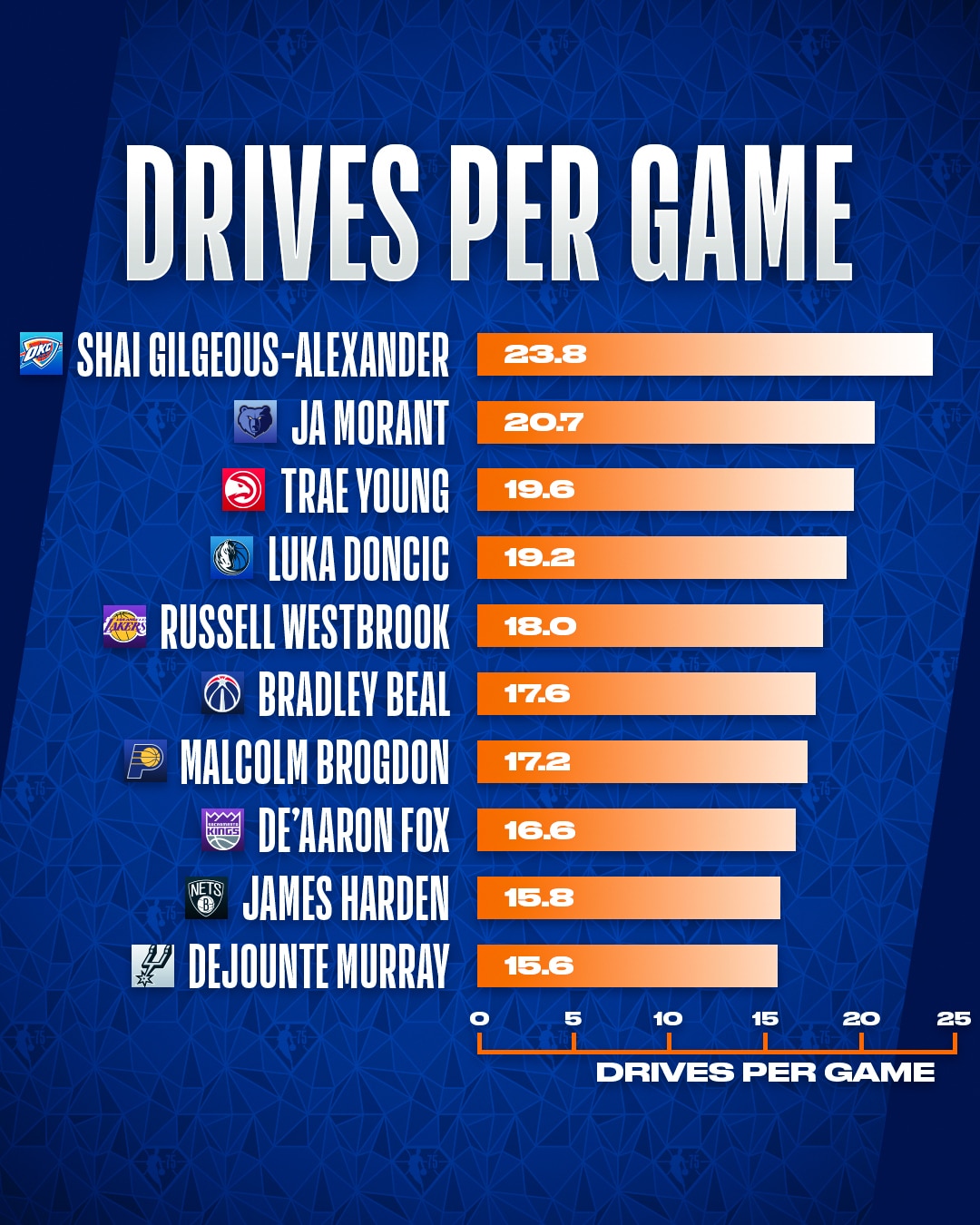 Shai Gilgeous-Alexander: SGA averages 3.1 more drives than any other player in the NBA. He trails only himself from last season (25.2) for the highest drives per game average for a season since player tracking data became available in 2013-14.

Last season, SGA finished second in scoring off drives (13.1 ppg, 55.4 FG%) and third in assists on drives (2.4 apg). So far this season, he’s found a good balance between shooting (10.0 FGA) and passing (9.8 passes per game) off his drives but has not had the same level of efficiency. His 47.7 field goal percentage and 7.2 assist percentage off his drives are on pace to be the lowest marks of his career. However, SGA does lead the league in free throw attempts off drives (4.3 per game), which is 1.3 more than he averaged in each of the past two seasons. 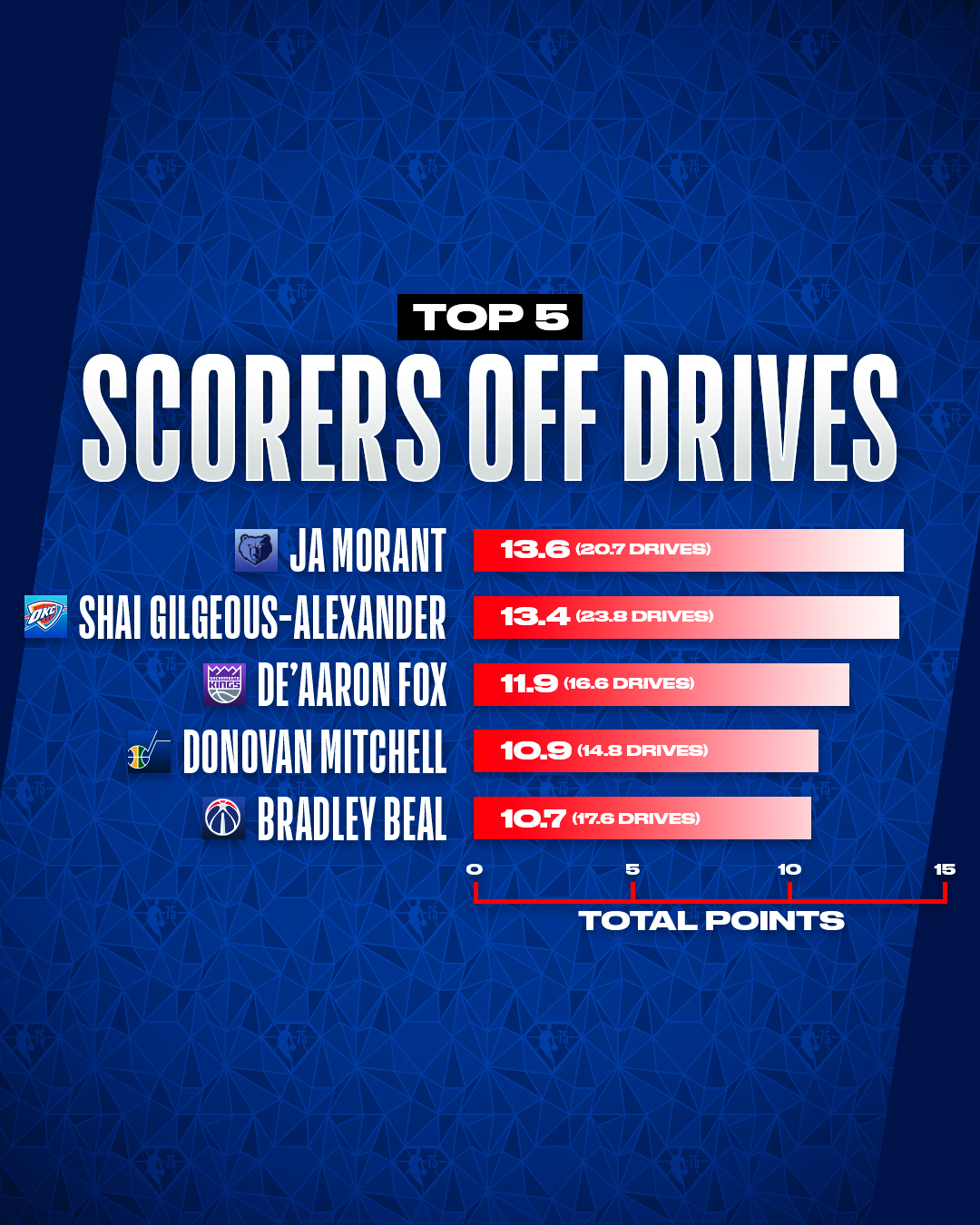 Trae Young: Young ranks third in the league in drives per game (19.6), sixth in points off drives (10.5) and fifth in assists off drives (2.2). Young has ranked in the top four in drives per game each season since he entered the NBA in 2018-19. During his career-best 56-point performance against Portland on Monday, Young scored 22 points on 15 drives to the basket, but none of his 14 assists came off drives.

Luka Doncic: Similar to Young, Luka has been a fixture in the drives leaderboard since entering the league in 2018-19. After finishing ninth in drives per game as a rookie, Doncic has finished second in each of the past two seasons and currently ranks fourth in the league. Doncic has been one of the league’s most efficient scorers on drives to the basket; this is his third straight season shooting over 56%. Of the 35 players that attempt at least five shots per game off drives, Luka’s 57.0% ranks second only to his Dallas teammate Jalen Brunson (57.5%) so far this season.

Russell Westbrook: No player has led the league in drives per game more times than Westbrook (3), peaking at 20.8 drives per game during his season in Houston in 2019-20. This season, Westbrook ranks third in passes off drives (8.7 per game) and fifth in assists (2.2). Westbrook’s 50.8 FG% on drives is his highest mark since the 2019-20 season 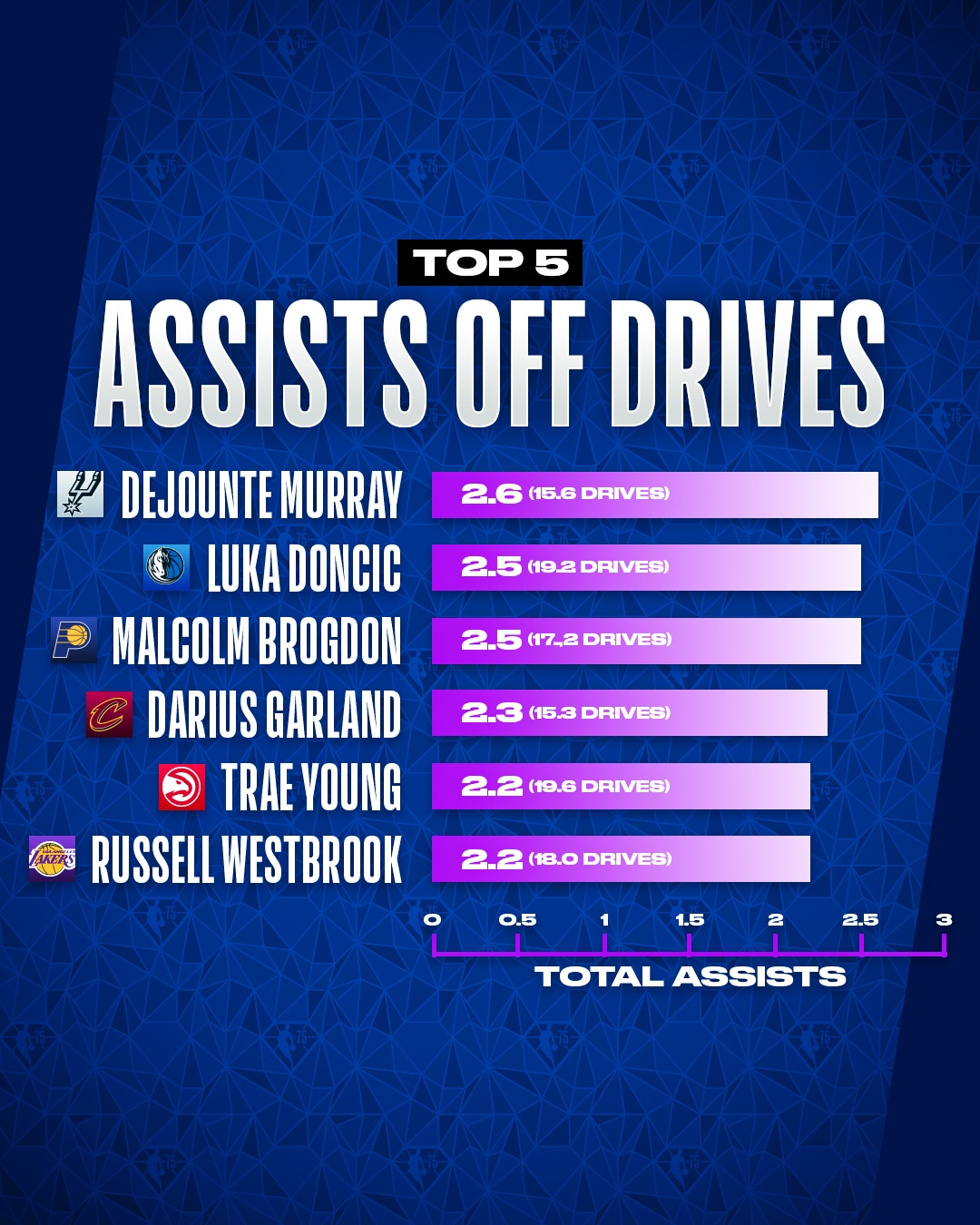 Malcolm Brogdon: Brogdon ranks second among all players in passes off drives (9.0) and those passes have resulted in 2.5 assists per game – tied with Doncic for the second-most assists off drives so far this season. In addition to his assists, Brogdon averages 8.0 points off drives, shooting 53.6%. Brogdon is the only player in the top 10 in drives to have drives account for over 40% of both his points (42.1%) and his assists (41.0%).

De’Aaron Fox: When Fox drives the lane, he is looking to score first and pass second – although one of those passes came on a game-winning buzzer-beater by Chimezie Metu last week.

Of the 47 players in the league that average at least 10 drives per game, Fox has the third-highest scoring rate at 71.6%, trailing only Donovan Mitchell (73.7% on 14.8 drives) and Zach LaVine (72.4% on 10.1 drives). In addition to his 8.9 field goal attempts on drives (fourth in league), Fox also earns the second-most free-throw attempts off drives (3.7) so far this season.

Dejounte Murray: Murray leads all players in assists off drives (2.6 per game) so far this season, but ranks eighth in passes off drives (7.6 per game). The fact that 34.2% of Murray’s passes off a drive result in an assist is a testament to the quality of his passes and his teammates knocking down open shots when the passes arrive. Murray’s instinct on his drives is to pass first and shoot second as he averages the fewest points per game (6.4) among the top 30 in drives per game.